Participating in the Ritual of the Concert

As we watch, the musicians file onto the stage. All are wearing black, the men in tuxedos with white shirts and bow ties and the women in black ankle- or floor-length dresses. Those whose instruments are portable are carrying them, in the way musicians do the world over, as if they were extensions of themselves and of their bodies. Their demeanour is restrained but casual, and they talk together as they enter and move to their allotted seats. Their entry is understated, quiet; there is none of the razzmatazz, the explosion of flashspots and the flashing of coloured lights, the expansive gestures, the display of outrageous clothing, that marks the arrival on stage of many popular artists. Nor does the audience react to their arrival. Not even a round of applause greets their appearance, while they in turn behave as if unaware that some two thousand people are watching them. They seem in fact to inhabit a separate world from the audience, which watches them as from a distance and will in a few minutes listen to them as if through a visually and acoustically transparent but socially opaque screen at the edge of the platform.’ (Small, ​Musicking, ​p.26)

In his description of a symphonic concert situation, sociologist of music Christopher Small observes what is actually happening in the concert hall. Why do we behave as we do during a concert? Where do our concert rituals come from? And how could they be different? Audience participation starts with an understanding of how your participation in a classical music concert has a long history.

Roles of the Audience in Regular Concerts

There are different roles that you take as audience member when going to a classical music concert. First, you can take the role of the consumer when you consider buying a tickets for a concert. As a consumer, you state your preferences for specific orchestras, composers or compositions by buying a ticket or not. As a consumer, you expect a smooth path towards the concert: buying tickets should be easy, and you expect a certain hospitality when arriving at the venue. For example, there should be  enough parking space, a welcoming staff or volunteers who are friendly, and coffee or other drinks being served before and after the concert. Although these conditions do not seem to be connected to the actual concert, surveys show that they do impact the concert experience.

When entering the concert hall, your role changes. You take part in an emerging musical situation. You sit down in a comfortable concert seat, and you wait for the orchestra to enter the stage. During the performance, you try to experience the music in silence. This mode of audience participation is called attentive listening: listening in silence, concentrated and attentive to the musical performance.

The practice of attentive listening is central to the symphonic concert as a ritual. The concert hall is built for attentive listening: its acoustics allow for superior sound quality, and the architecture separates the outside world from the sanctuary within. The concert hall has even been compared to a cathedral that serves experiencing the secular ritual of attentively listening to classical music. The performance space ‘silences’ the listener, as the attentiveness of the audience is supposed to be directed towards the musician.

While it seems passive at first sight, listen attentively to a classical music concerts takes quite some effort. You have to concentrate on the performance, and try not to get distracted by noises that fellow-audience members make. Attentive listening also comes with the expectation that you know about the composer and the composition so that you understand the context of the music and what is relevant about it. Attentive listening is part of the traditional classical culture, valued by classical musicians and by audience groups alike. At the same time, this way of experiencing a concert is seen as elitist and exclusionary by others – for example, by younger concert-goers (see for example the experiment Bucketlist Concerts).

As audience member, you already participate in the concert in an active way: by attentively listening and by following the rules of behaviour that come with this ritual. But what happens when the orchestra deviates from this ritual, for example in experimental or participatory concerts?

Participating in an Experimental or Participatory Concert

Mahler am Tisch: a shared responsibility for the musical situation

In the experiment Mahler am Tisch, three ensembles of orchestra musicians together with semi-professional and amateur musicians, adapted music of Gustav Mahler to perform it in a bar in Maastricht, the Netherlands. Café visitors present were not informed that this concert would take place. The researchers were part of the audience, and observed how the musicians performed and interacted with the café visitors, and if and how a musical situation would emerge.

In both bars, the musicians performed in close proximity to the crowd of the café which made for an intimate situation. Each of the three ensembles seemed to create their own musical situation in the space, with their own specific audience: from a jolly and undisturbed crowd for the klezmer-band, to an attentive and silent audience attuned to the string ensemble. When the violinist from the string ensemble stood up and asked the present bar visitors for some silence for their next piece which was quite delicate and soft in nature, she was asking for the audience to be attentive.

In doing so, the violinist allowed an audience to come into being – one that could make an effort to care for the shared situation, not because attention and silence were the expected norm, but because the music and the instruments needed it in that specific situation. In contrast to the concert hall, where the ritual masks this shared responsibility for the musical situation, in Mahler am Tisch it became visible (and audible) that both musicians and audience need each other to make the shared musical situation work. 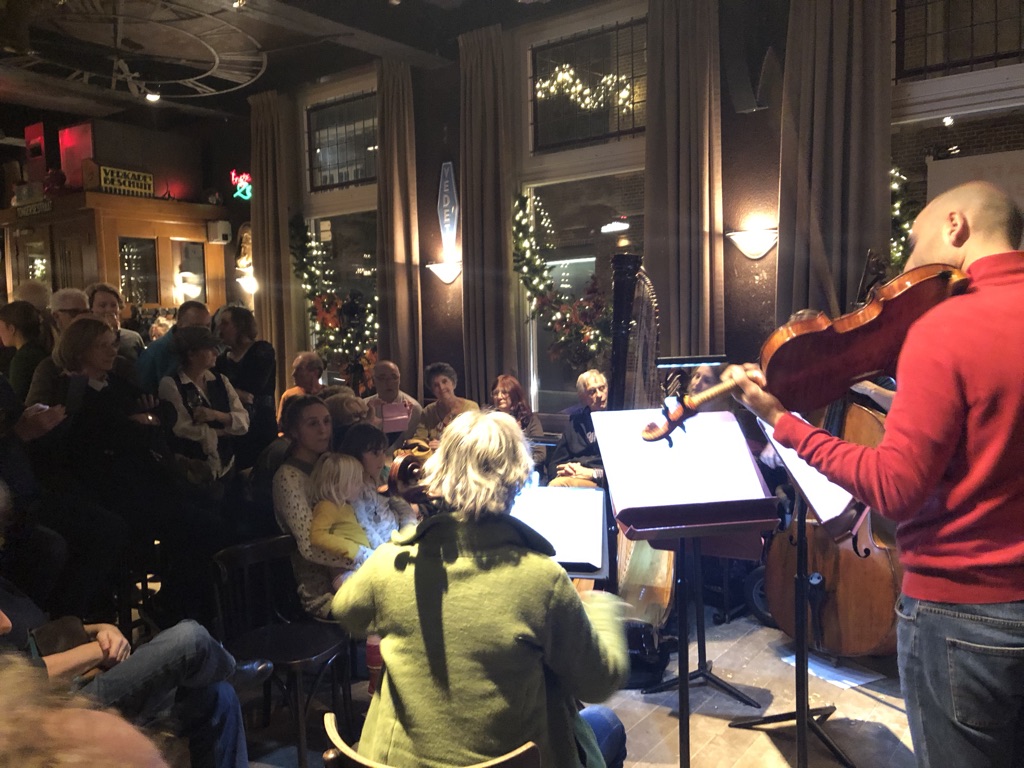 The i-Classics Empty Minds project by South Netherlands Philharmonic experimented with a new form of audience participation. The concert took place in a pop music venue in Maastricht, and in a refurbished industrial building in Eindhoven. The orchestra was not positioned on a central stage, but spread throughout the concert venue in smaller groups, with the conductor in the middle. During the concert, audiences could walk around, and choose a position close to the different instrumental sections of the orchestra as they liked.

During the concerts, an interesting paradox emerged: when audience members actually ‘took’ the freedom that they were given during the experimental concert, the resulted behaviour was not necessarily planned or envisioned as ideal by the artistic team. In fact, many audience members did the opposite of what the artistic team had imagined: they tried to experience the experimental concert in a more traditional way. They sat down, or went up to the balcony to hear the orchestra as a whole rather than taking different positions amongst the musicians. As it was unclear to the audience what the rules of behaviour were, they reverted into listening modes that are normal during a concert of a symphonic orchestra, going back to ways of being an audience member that they were familiar with.

What the researchers learnt from this experiment, is that participating in an experimental concert can be challenging for audiences. Often, there are no clear instructions for the audience about their role in experimental concerts, and you have to figure out yourself what to do in such an experimental concert situation. Becoming aware of the existing routines and rituals of the classical music concert, can make you as audience member more reflexive: it allows you to figure out what to do when these routines are broken. Becoming aware when you feel you become an audience, and how your behaviour contributes to the musical situation, can help you as audience member to experience classical music a new – be it in a regular concert hall, or in an experimental situation.

Discussing the Quality of a Concert

When do you experience a concert as ‘good’? Audiences often feel uneasy or insecure when evaluating a concert they attended. “But I’m not an expert!” is a response often heard when asking concert goers about the quality of a performance. But why would you have to be an expert to evaluate classical music concerts? Where does this idea come from? And what other ways are there to talk meaningfully about classical music than in terms of musicological expertise?