Skills of Imagining an Audience

Audience Participation from the perspective of a Musician

As a musician, you are used to a certain way of working. While every musician will have their own practice and rehearsal habits, rehearsals and performances for orchestral concerts follow certain rules and ways of working – routines that are aimed at creating a predictable and risk-free environment that aims towards performance precision. Yet what lies beneath routines of practice are value systems. So when underlying values shift and change, then routines of rehearsing and performing do too. This was what was learned in the Mahler am Tisch project.

In this project, we worked to rearrange the music of Mahler to be performed in a local café-bar, alongside “folk” music that inspired him and his music. The project invited musicians to be open to rearranging works from the classical canon – to being open to them not being performed as “originally” written. For some this went against the value of “fidelity to the score” that is strong within the classical music sector. Yet the underlying value of “attentive listening” was even more strongly challenged and more strongly resisted than that of arranging the classical canon.

Much of classical music practice is geared towards the belief that only attentive concerts are of value, which is heavily related to the importance placed on a musician’s ability to expertly recreate the “original composition” (ie. fidelity to the score). This can lead to a suspicion of audience tastes – they are seen as “amateurs” and not as “experts” who are able to appreciate the complexity of classical repertoire. However the Mahler am Tisch project was interested in approaching the audience as an “expert” in its own right – it didn’t demand that audiences should “listen attentively” but just experience the music in the convivial context of a café-bar. Yet, for the musicians, this approach wasn’t easy to embrace.

The researchers recognized the value of attentive listening (both for the musicians and the audience) but also wondered whether the strict way it's implemented in classical orchestral settings could be a barrier to many (new) audiences. To explore this idea, the musicians were encouraged by the task at hand in this project to start to shift the meaning of “attentive listening” – to think more of the whole experience and of the audience as individuals with their own value. This approach shifts from demanding attention to the act of engaging perception. 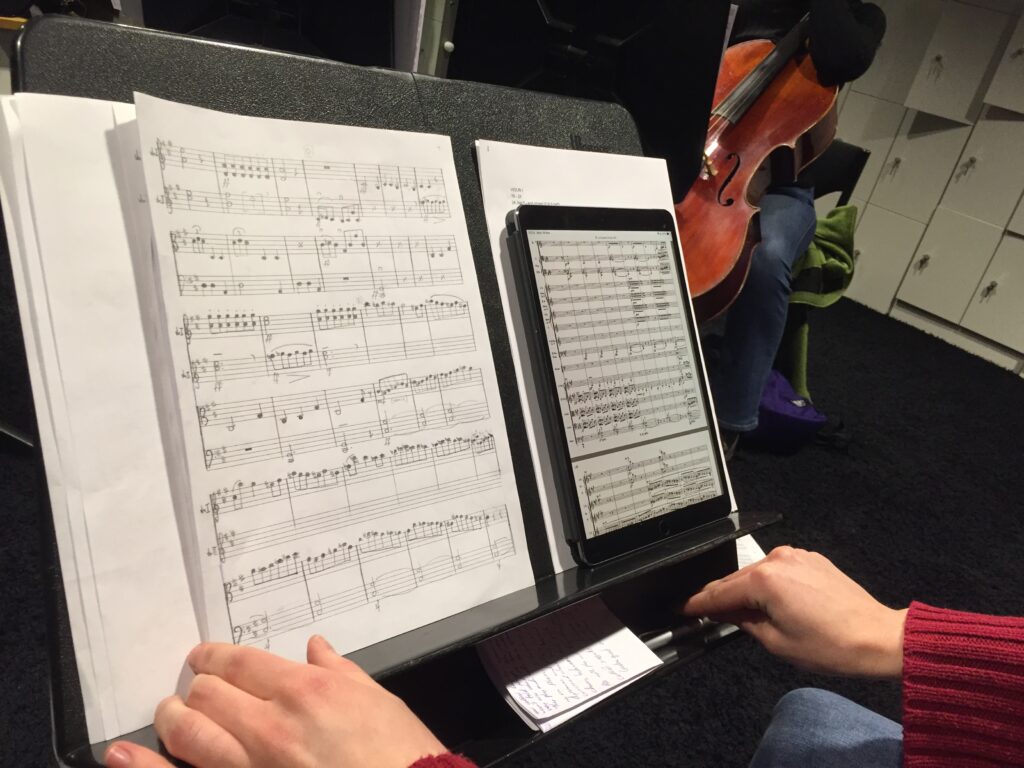 Rehearsal for Mahler am Tisch

In this way, a form of attentiveness might be achieved, but it’s understood as a request and not as a demand. To request attention to speak musically, to perform and to tell a story, is to invite the audience to take a responsibility for the musical situation. This approach seeks to open up the ways audiences can attentively listen to concerts, and the ways musicians engage with listening audiences.

For the musicians of Mahler am Tisch, thinking about the audience in this new way was an essential first step – one that altered the way they approached the music. At first, they still envisioned the audience as amateurs who would have little interest in the music of Mahler: some suggested playing more “light” folk music (and less Mahler arrangements) presuming that the audience would “digest” this repertoire better.

However, one group decided to be bold and chose to perform a rearranged version of Mahler’s Adagietto (for harp, string quartet and bass). A slow and intense piece such as this is not typical café-bar music – but in choosing to perform this piece, the interpretation and the way it was presented to the audience was strongly taken into account. The ensemble focused more on tempo and movement (and less on rubato) and worked on heightening their ensemble communication (more necessary in a noisy bar context) through broadening their body posture, becoming more like a “band”. These elements aided ensemble cohesion, musically – but also enhanced the communicative and engaging aspects of the performance, visually. They really brought the audience to them, as musicians started to engage with other modes of listening.

Performing in café-bars with newly-arranged music and with a different approach to chamber music meant the musicians had to explore new performance skills. Yet these skills stem from an underlying perspective towards the audience – approaching attentive listening through engaging perception. 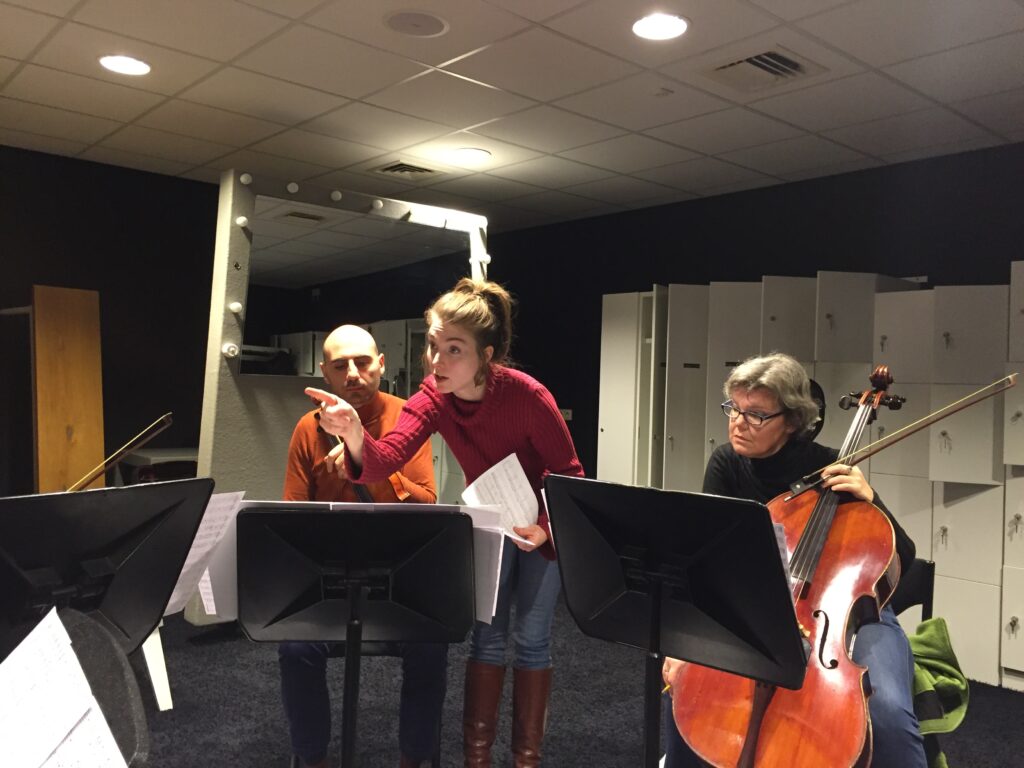 Rehearsal for Mahler am Tisch

Mahler am Tisch deliberately broke away from the routine way of thinking about music (‘fidelity to the score’) and the audience (‘attentive listening’ and ‘non-experts’) – so, the rehearsal process came with some insecurities, frustration and resistance amongst the musicians. They were particularly concerned that shifting the focus from the music to the audience would negatively affect their overall performance, even if the rehearsal process still entailed a rigorous approach to musical detail.

Yet rearranging music and thinking about body posture do take time away from normal rehearsal practice, and this proved difficult to take into consideration; both mentally and logistically. Additionally, many of the musicians found it hard to ‘trust’ the audience – that they might have tastes that could be interested in hearing Mahler’s music and not just the “folk” music he was inspired by. Yet despite these issues, the musicians were able to reconsider their value systems and the practices that belong to them. Eventually, they were able to create – together with the audience – lively and open musical experiences.

The musicians of Mahler am Tisch were asked to approach their performance differently, and to utilise skills that were not familiar to all members of the ensemble. At certain moments during the process the musicians were encouraged to start the arrangements from “Playing by Ear”, which is not common in classical music practice. They also worked on their body posture and feeling “grounded” in order to enable more expressive and intentional movements.

Mahler am Tisch purposefully nudged musicians away from their routine values and practices – their routine ways of thinking and rehearsing. Without the norms of performance in place, and without the self-evident expectation of a silent and attentive audience, they became vulnerable. Instead, they were invited to rehearse for a particular imagined audience in a particular context. To imagine such a particular audience in a rehearsal process is a reflexive invitation. It asks musicians to reassess their normal ways of working and directs the attention from musical refinement to other skills needed for performing differently: such as communicative body posture and interpretive flexibility. To practice these skills takes an attitude shift, and time – time that is not always readily available in standard rehearsal processes.

In the Etude-section, you can find exercises by which you can practice some of these skills yourself. What other skills do you think are relevant for performing for different audiences or different venues?

Eve, I. (2020). The Same but Differently. Maastricht: Research Centre for Arts, Autonomy & the Public Sphere.

An orchestra seems to function as a machine, with strict hierarchies and division of roles. But the orchestra is also an organic organization of different people, all working together to make fantastic concerts and educational programs possible. What is your role as musician in the organization of the orchestra? How can you foster a greater sense of agency and responsibility in new performance contexts?