What does it take to perform classical music online? How to perform without fellow-musicians or audiences physically present? During the first outbreak of Covid-19 (March 2020), researchers explored these questions with five musicians from philharmonie zuidnederland in the experiment Online Musicking. Digital media afford different options and opportunities for musicians and orchestras than concert halls. Online Musicking is a story of five musicians and three researchers, who aimed to engage in a community-music project, but instead found themselves isolated at home with only their instruments and digital tools at their disposal.

In February 2020, five classical musicians from philharmonie zuidnederland sit in a classroom at Maastricht University (Maastricht, the Netherlands). Together with three researchers they discuss their plans for an experimental community-music project that is about to take place in the Northwest neighbourhood of the city. Starting from issues voiced by the inhabitants, the musicians and the residents were about to embark on an artistic process of composing, arranging, and organising events that would explore how making music together could provide new opportunities to share ideals, experiences and stories in the neighbourhood.

And then Covid-19 came. Shortly before the start of the project in early April 2020, the Dutch government issued measures against the outbreak of Covid-19. The subsequent lockdown started in mid-March and continued until June that year. All social events were cancelled, and we could no longer meet people from the neighbourhood. The musicians were not able to rehearse or perform with the orchestra and found themselves at home without an audience. We tried to connect digitally with the communities of the Northwest neighbourhood, but many inhabitants were not able to go online or had other, more urgent, concerns.

Limited to online communication and unable to reach our intended community, we decided to move the experiment online and focus on what we could do with the limited means we had. Over the course of twelve weeks, all in home isolation, the musicians and the researchers practiced and experimented with Online Musicking: arranging, rehearsing, performing, organising, producing, recording, and editing classical music performances on the internet.

We build a website that functioned as a kind of digital rehearsal space, where musicians and researchers could freely document their experiments with Online Musicking: http://onlinemusicking.nl

The first weeks after the outbreak saw a host of classical music initiatives on social media, ranging from individual soloists performing from their balconies and living rooms, to orchestras recording Zoom-performances and whole neighbourhoods singing opera aria’s. The researchers documented these instances of Online Musicking and discussed them with the musicians.

Somewhat hesitant, the musicians started experimenting by creating individual videos, ranging from reflecting on what it means to teach violin over Zoom, through a podcast with inspiring stories about canonical musical works, to a series of two-minute videos in which a violinist performs before various ‘stand ins’ for her lost audience, such as a collection of drawings of people on the wall in her apartment. When the musicians experimented with filming their own performances, using their smartphones, they discovered that such home-made online videos do have their own aesthetic qualities, such as intimacy, directness, and authenticity. The musicians were imagining what an online audience could appreciate in such videos. As one musician reflected: “Seeing a fellow-musician playing violin in her own kitchen takes away some of the formality and stiffness, it shows the human behind the musician.”

Some musicians, however, were hesitant to produce something of ‘low’ sound quality, given the lack of professional recording equipment at home. What would possible audiences or colleagues think? One violinist argued: “The smartphone has become an important part of our lives while in lockdown. And if we keep trying to get the best acoustic quality that is possible, then we are trying to conceal that we don’t have access to a concert hall right now. So, if we really would like to relate to the world in this moment, then we should use our smartphones.” 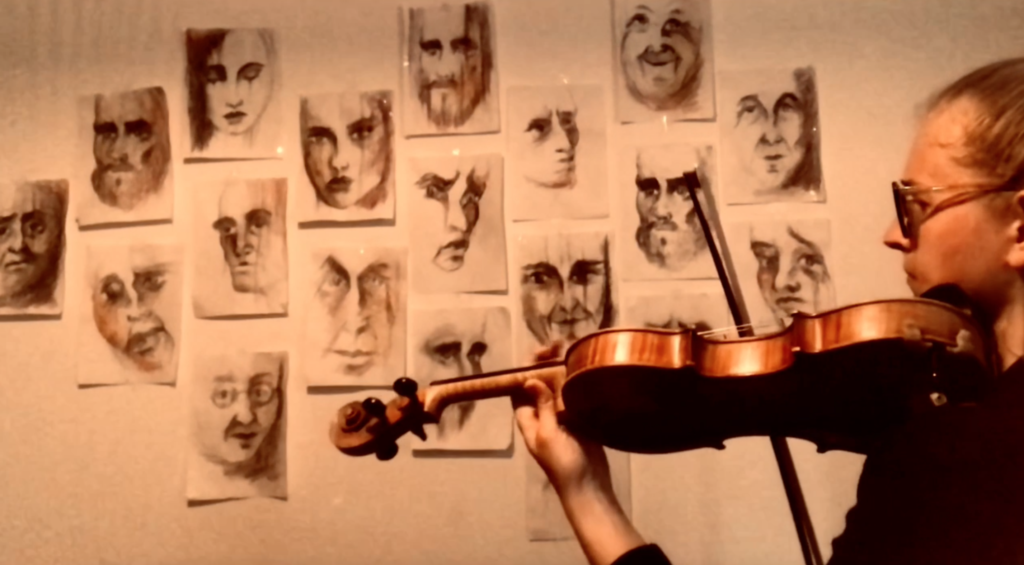 Musician from philharmonie zuidnederland experimenting with an imagined audience

After individually experimenting with different digital media, the group decided to try to create a collaborative music video, in order to reach a specific audience: the digital audience of the philharmonie zuidnederland. The musicians who volunteered for our experimental project were not selected based on their instrumental specialism, resulting in the unusual instrumentation of two percussionists, two violinists, and a horn player – while one percussionist also played bass guitar.

In the digital realm of course, these instruments could be overdubbed (adding additional tracks in the recording), multiplying violins, percussion, or horns where desired. The musicians first worked on a waltz from Dmitri Shostakovich’s Jazz Suite that could easily be arranged for the instruments we had. Later, one composer in the group arranged selected songs (Lieder) by Franz Schubert: Die Forelle, Erlkönig and Lachen und Weinen.

As one musician had some experience with audio and video editing software, we discussed the arrangements from the perspective of a producer, balancing requirements for software editing with musical criteria, in order to create a recording plan. To compensate for not being able to make music together in a physical space, the musicians decided to play with a midi-track and a click track in their earbuds (a digital metronome), so at least their tempo should be easier to sync when the video was edited.

All musicians struggled with the midi-file that acted as a guide track, as this violinist reflects: “I will not trust myself to follow the intonation of the midi-file because it takes all your basic thoughts of intonation away… there are so many things that happen naturally. It really helps if you hear the sound colours of the other instruments.” Or, as one percussionist argued: “The problem with us as professional musicians is that we adjust all the time. We always gradually fix our mistakes and our timing. (…) It has to do with precision, with being strict to yourself in terms of timing and intonation.”

Throughout the experiment, the musicians and researchers tried to imagine an online audience. We were assuming elusive, invisible, and diffuse audiences that manifest themselves on various online platforms. The musicians started with adding a simple instruction to their video, asking their viewers to wear high-quality headphones. Later, they discussed how they could make the viewers of the video feel part of an actual audience by inviting them to respond to the videos with their own experiences and stories about the lockdown. Because online audiences appear so elusive and invisible, the question of who the audience is for a particular musical work not only became an explicitly debated topic, but it was also present through the entire artistic process.

The question of repertoire – what music to perform now and why – also brought up discussions about the societal relevance of classical music. While relevance is often sought and being made through addressing different kinds of audiences, it appears much harder to connect it to the content of musical works: to the canon of repertoire of classical music. Strikingly, in the online experiment, musicians explicitly asked the question of which works from the canon would be suitable for home-isolated audiences in corona-times.

The musicians chose songs of Schubert to convey the different emotions that people can experience during a Covid-19 lockdown. One musician recorded visual shots with her smartphone camera to connect the theme of the Schubert songs with different emotions during lockdown. The intention was that the songs gained new meaning and relevance when performed in times of crisis.

While imagining an audience while planning, recording, and assessing performances helps to make decisions, eventually the musicians were hesitant to spread the finished video to specific audience groups. As one violinist worried: “People expect a lot. They are used to seeing videos of high quality. You get so used to hearing perfect things that it becomes more complicated to do something more real.” After discussing our DIY-approach, and the vulnerability of improvising and experimenting, we decided that we should share the video with colleagues in the orchestra as it shows what it takes to perform online together as individual musicians, and to “create something out of the normal”

In the beginning of our journey in Online Musicking, most musicians were reluctant to value the homemade online videos of classical musicians and orchestras. But when experimenting with creating their own performances using their smartphones, we discovered that the videos have their own quality and aesthetic values, such as intimacy, directness, and authenticity.

With nothing less than their instruments and smartphones at home, the musicians created two collaborative music videos. The final video is an adaptation of Schubert, not only because we arranged his songs for this specific and arbitrary instrumentation, but also in the way that it connects and adds a new relevance to them, by explicitly putting them in the contemporary context of the corona-crisis. The musicians managed to combine and balance with different sets of aesthetic criteria: acoustic, visual, and narrative criteria. In the end, it was challenging to lower the high expectations both musicians and audiences have about the acoustic and sound quality of music videos.

The musicians and researchers were amateurs in digital recording, editing, and producing of videos with smartphone cameras. The experiment Online Musicking showed the hidden work that goes into creating a collaborative music video based on individual recordings: the negotiation and balancing between different aesthetic criteria; the different ways to cope with and complement the lack of playing (articulating, intonation and playing in-tune) together in the recording and editing process; the skills that are needed to perform in front of a camera and make it into a collaborative whole.

The experiment highlighted the value of skills essential to musicians’ usual practice, and how these skills are cast asunder in a digital environment. Our attempts at Online Musicking raised topical questions and challenges regarding performance qualities, audience participation, and societal relevance. Eventually, these challenges hindered us in fulfilling our ultimate goal of finding an actual online audience. 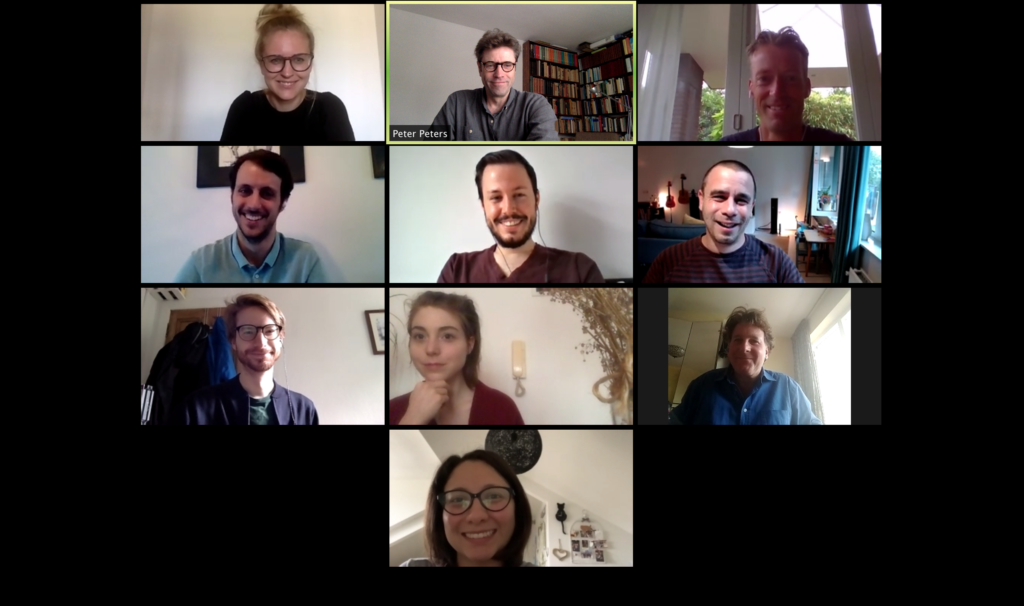 Musicians and researchers of Online Musicking

The outbreak of COVID-19 in 2020 has greatly impacted musicians and orchestras. Classical music initiatives on social media in the first weeks of the lockdown in many countries emphasized the power of music to bring people together. While many orchestras had ample experience in producing and distributing their concerts online, others now had to experiment with new ways of performing online. The pandemic also made the questions of what music to perform, how exactly to perform it and for whom it should be performed all the more urgent.

The experiment Online Musicking showed the hidden work that goes into creating a collaborative music video based on individual recordings: the negotiation and balancing between different aesthetic criteria; the different ways of coping with and complementing the lack of playing together in the recording and editing process (in terms of articulation, synchronisation and intonation in particular); the skills that are needed to perform in front of a camera and make it into a collaborative whole.

Our attempts at Online Musicking raised topical questions and challenges regarding performance qualities, audience participation, and societal relevance. The balancing of musical criteria with aesthetic criteria specific for online media, the curating of an online listening space for audiences, and the question of societal relevance of classical music in a societal crisis and online environment, are issues that are not easily overcome – both on an individual and an institutional level. That we eventually did not reach a specific wider audience (other than some colleagues of the musicians) illustrates this.

To read more about audience participation from the perspective of a musician, read the Journey of the Musician.