In the Artful Participation project, researchers observed and intervened in the orchestra philharmonie zuidnederland. Bucketlist Concerts was a project developed by philharmonie zuidnederland in which researchers closely participated as observers, to learn what it takes to do things differently in the orchestra, and to draw lessons for other experiments.

How to attract a younger audience for classical music concerts? This was the central challenge in the marketing-project Bucketlist Concerts by philharmonie zuidnederland in 2019-2020. For a series of regular concerts, the marketing department of the orchestra developed a marketing strategy targeted at young audiences. To find out how they addressed this age group, what challenges and obstacles they faced in the process, and what happened in practice, a researcher from MCICM participated in the development of Bucketlist Concerts. What lessons did we learn?

An alternative campaign to an existing concert series

When talking about innovation or audience participation in classical music, a much-heard cry by musicians, staff and audiences alike is the desire to attract younger audiences. The average age of the regular concertgoer of philharmonie zuidnederland is above 60 (Flycatcher, 2018). To get younger people attending concerts of the orchestra, a marketeer in her twenties from philharmonie zuidnederland together with Luidspreker (an external creative studio), developed a specific marketing campaign, tailored to audiences between 20 and 30. They called it Bucketlist Concerts, referring to the famous list that contains things you have never done but would like to experience in your lifetime. The project had three aims: to make classical music more accessible to youngsters; to persuade youngsters to attend concerts of philharmonie zuidnederland; and if they attend concerts, to provide them with a good experience (“een fijne avond”).

The Embedded Researcher: observations of a critical friend

The process of developing Bucketlist Concerts was closely followed by a researcher of the Artful Participation-project, who acted as a critical participant-observer. The aim of this embedded research was to observe and learn from the ways the audience is constructed and imagined in this campaign, and how youngsters were engaged with by the marketing/communication department of the orchestra.

To read more about the ways the researchers conducted research, combining artistic research with ethnographic methods of observing and intervening, read the Journey of the Innovator.

During the process of the developing and executing Bucketlist Concerts campaign, the researcher probed the marketeers by asking questions, such as: What is the ideal audience for this concert? What are your assumptions of younger audiences? Why did you choose this visual style for the campaign? How is this marketing campaign different from other marketing campaigns? And what are possible consequences for artistic programming? By asking such questions, the researcher aimed not only to make implicit assumptions visible, but also to improve the process of developing a marketing campaign.

During and after the process, some insights emerged among the researcher and the marketeers. These lessons learnt are about the ways youngsters were imagined and addressed in the marketing campaign, and about the side-effects of demarcating a specific audience group. 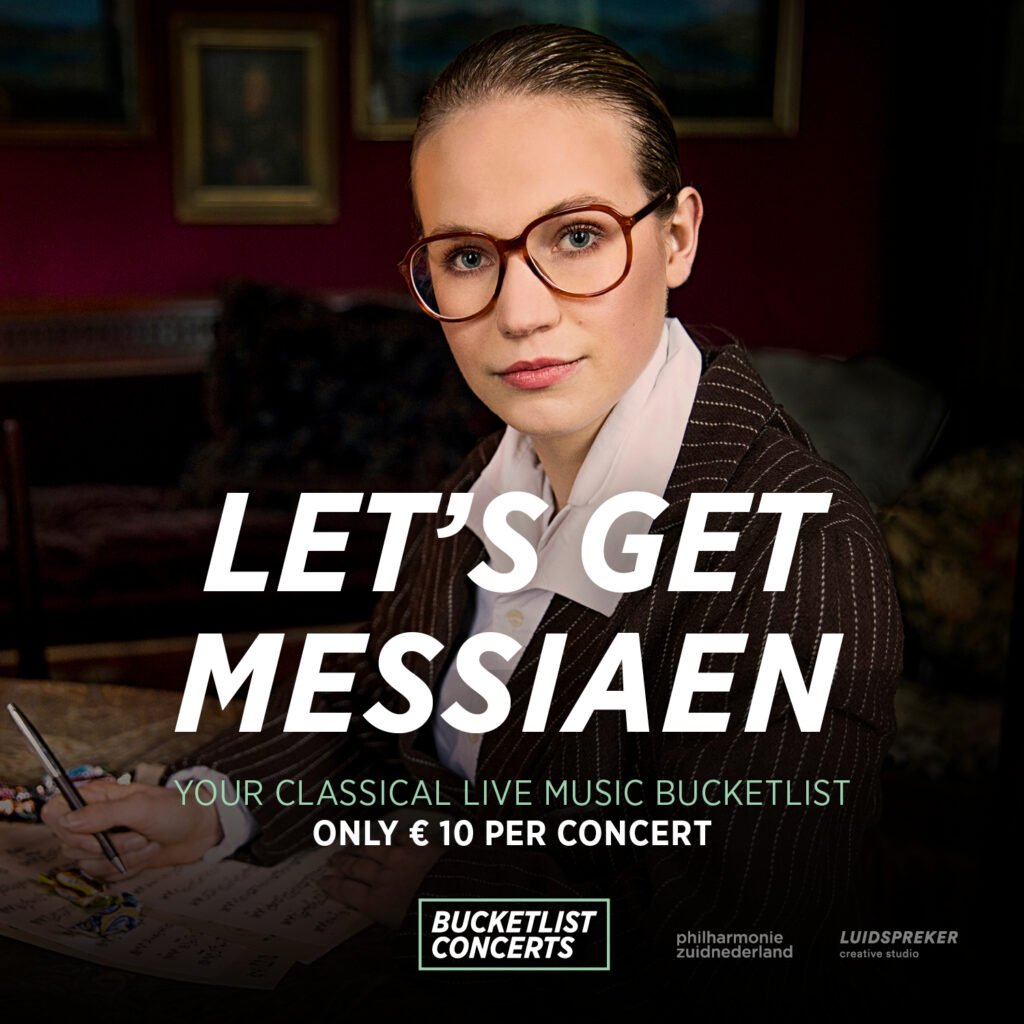 Based on existing studies of international orchestras, and student internships, the marketeer and the creative concept developers identified three obstacles for young people that prevented them from attending classical concerts. First, a financial reason: the price of tickets is often too high for younger people. Second, young people experience a lack of knowledge of the history of classical music, and perceive that as an obstacle for attending concerts. And third, a social and behavioural barrier: younger audiences don’t identify with regular concertgoers, and would not know how to behave during concerts, for example how to dress or when to clap. The campaign aimed to take away these barriers, and lift “existing prejudices against classical music” (Luidspreker, 2019).

The marketing campaign selected four concerts in the regular program of the orchestra and labelled them Bucketlist-concerts. They lowered the prices of tickets for these concerts for people under 30, and they created specific marketing materials for these concerts, around the theme of being famous and FOMO (fear of missing out): Bucketlist concerts were presented as those specific performances of canonical works that you had to experience, at least once.

The visual style of the marketing materials aimed to bring canonical composers into the life worlds of millennials. The actors hired re-enacted famous composers in videos and images, dressed up with contemporary lifestyle consumer items (such as, Beat’s headphones, an iPad or a Starbucks cup). Apart from the digital campaign of these videos and images through social media, the Bucketlist Concerts campaign included posters and printed program notes. The program notes – handed out on the concert night – took the graphic form of a safety instruction card, similar to those in airplanes. These ironic and cheeky ‘Guidelines for safe concert enjoyment’ included topics such as clothing regulations, talking during concerts, smartphone use, clapping, and behaviour in the foyer (see the image of the flyer). During the concerts, a banner was set up as meeting point and flyers were handed to young-looking audiences.

Instructions for what to wear or when to clap relate to the idea of Bildung: audiences need to be educated in other to enjoy classical music and attend more concerts.

The educational ‘Bildung-paradigm’ has a long history in addressing classical music audiences. It assumes that if only non-users would learn to appreciate classical music – and gain the corresponding cultural capital – they will attend classical concerts more.

Strikingly, this ‘education’ of youngsters was not geared towards understanding classical music, but was limited to social behaviour; the instructions, although ironic, should help youngsters to feel more at ease during the concert experience. Detailed information about composers, the works performed or the orchestra itself – part of regular flyers of the orchestra – were deliberately left out, to not give an information-overload, and give the choice to the youngsters themselves (to look up more information if they wanted to).

The Bucketlist Concerts campaign imagined and addressed youngsters-as-audiences in a specific way: they were foremost addressed as consumers. The idea of lowering the barriers for youngers already implies the ways youngsters should be addressed: lowering the barriers for attending concerts, thereby easing the route for youngsters to buy the product of the orchestra (i.e. concerts). This idea of the audience is also reflected in the ways of evaluating Bucketlist Concerts: the main criterium was the number of youngsters in the audience of the concerts.

What would happen if youngsters were not imagined and addressed as consumers without understanding of classical music, but as citizens? When the researcher asked these questions, the marketeers had difficulty answering them. For them, the relevance of classical music concerts was a given, and did not play a role in developing marketing campaigns. When brainstorming together, the marketeers came up with some issues or concerns of youngsters, which they could use to make classical music concerts relevant in a different way. Such as a concert as a digital detox, a way to get out of your regular social ‘bubble’, or as a form of mindfulness. These ideas start from an imagination of youngsters as citizens with particular worries or concerns. Imagining youngsters differently, thus raised new questions and other ways to appeal to them.

Next to the idea of younger audiences-as-consumers, a lesson was learnt about the demarcation of audiences. This demarcation of younger audience from older (regular) concertgoers can have some undesirable effects. Regular concertgoers can feel excluded, but also the youngsters can feel excluded. For example, during the concert some younger-looking audiences wanted the regular flyer with a more detailed explanation of the composers and the work, but they were told by a volunteer that “those flyers were not for them” (Talk with marketeer, June 17, 2019). While this is probably an unfortunate miscommunication between staff and volunteers, it does indicate the risk of demarcation of audience groups: stereotyping and separation.

Young audiences, addressed as consumers without an understanding of classical music, could feel not taken seriously as audiences – a question that came up in the evaluation with the artistic programmer. While the marketeers aimed to lower the barriers for young audiences to attend the concerts, by ironically referring to the social norms in the concert hall, and leaving out more detailed information about the concerts, such special treatments run the risk of patronising and actually repeating some “existing prejudices against classical music” (Luidspreker, 2019) – which the campaign aimed to lift. Namely: that knowledge or understanding of classical music is only relevant for older audiences.

These side-effects also raise the question: on what criteria do you distinguish between audience groups? In the concert-series of Bucketlist Concerts, the main criteria were age and understanding of classical music. In an evaluation meeting, the programmer of the orchestra saw as benefit of the campaign that “it didn’t change our core-business” (Evaluation meeting Bucketlist, April 10 2019). In other words: addressing a younger audience in Bucketlist Concerts campaign did not result in making different artistic choices regarding the programming.

What would happen if you did make different artistic programming choices for addressing youngsters? Could there be an artistic criterium for selecting specific works of the canon of classical music specifically suitable for youngsters?

The Bucketlist Concerts campaign fits in a strategy that many contemporary orchestras adopt when finding new audiences: easing the route audiences have to take towards the music, by offering them a richer concert product or experience. While such a strategy fits our experience-society – where classical concerts have to compete with Netflix-binge watching – it does assume a clear distinction between those who are in the know about classical music (i.e. regular concert goers), and those who are not (i.e. youngsters in this case). There are many young people enjoying classical music through streaming services (i.e. Idagio, Primephonic, Qobuz), who may or may not regularly attend concerts. The category of ‘the youngster’ is less homogenous and more ambiguous than assumed in Bucketlist Concerts campaign.

To read more about the societal relevance of music and the role audiences as citizens, see the Journey of the Marketeer.